Full speed ahead with Unimog.

With its versatile implement attachment and mounting areas there are practically no limits to the applications the Unimog can be used for. It can tow trailers weighing several tonnes with the same ease with which it covers cross-country terrain.

There’s a suitable model in the Unimog family for almost every purpose, and Cologne’s Waterways and Shipping Authority (WSA) have found theirs, choosing the Unimog U 427 as the new implement carrier to support them in their day to day operations in the city.

Two generations of Unimog working together.

The WSA is responsible both for keeping the federal waterways open and for the safety of the vessels themselves. That’s where a talented all-rounder fits in. It’s a good thing the authority can count on the ever-dependable Unimog to help with a range of tasks relating to development projects and damage investigation.

The WSA has been using Unimog vehicles for ten years already, having acquired its first Unimog U 400 in 2008. It has proved so successful that it is now being joined by the new Unimog U 427. Unimog agent RKF Bleses handed over the Unimog U 427 to its proud new owners at the WSA at the beginning of March 2018. With its vehicle fleet now supplemented by another multi-talented performer, the WSA will be able to contribute even more efficiently to the safety of North-Rhine Westphalia’s waterways.

The newcomer has undergone one or two changes compared with its older colleague, the Unimog U 400. Foremost among them is the inline 6-cylinder engine (OM 936 LA) with 7.7 l displacement: generating 200 kW (272 hp) and a maximum torque of 1100 Nm it meets the current Euro VI emissions standard and provides plenty of power to see you comfortably through your day’s work.

The new addition is equipped with a Hauer POM-RX-500 front loader and a fully hydraulic Palfinger PK9002 EH loading crane at the rear. Thanks to the crane’s 5.8 m reach and the axle load capacity of up to 4500 kg, the Unimog U 427 is well prepared for any emergency in the shipping lanes. A Werner winch rounds off the Special Truck’s professional equipment list. 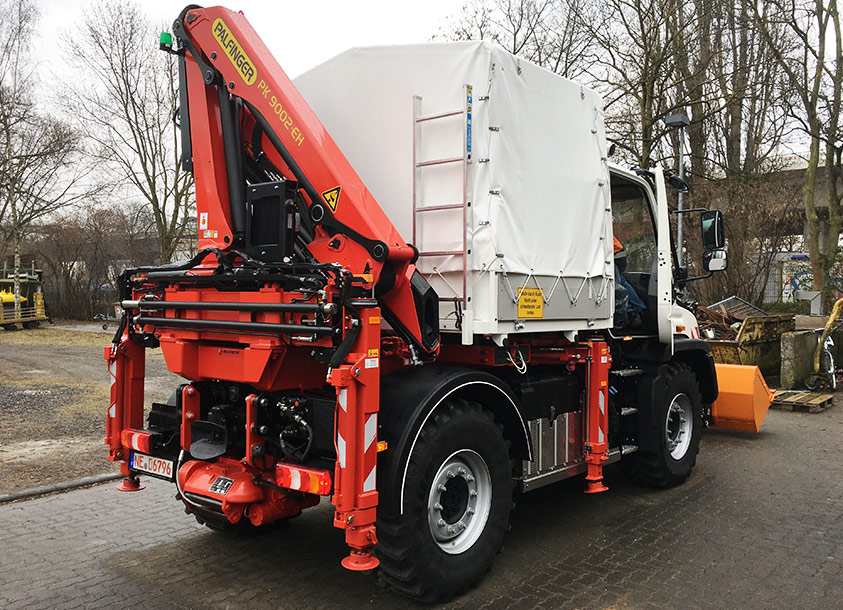